Buenos Aires is absolutely a first world city. For sure it has an old European style, with its old buildings following the French architecture, its British manners, its Italian way of thinking... Someone said that the "Porteño" (the one who was born at Buenos Aires Capital) is an Italian who thinks is British and speaks Spanish. Must be!


Not too long ago we have any possibility of using bicycles in Buenos Aires as a main of transportation, even if it is the perfect city for that. This was because of the lack of space in the old streets and the appropriate roads.

The development and modernization of the city, as well the touristic boom, lead the government to start following the international tendency of big cities like Paris, Barcelona and New York, to encourage people for using bikes as an ecological, healthy and quick vehicle, and nowadays we count with many easy and safe possibilities. 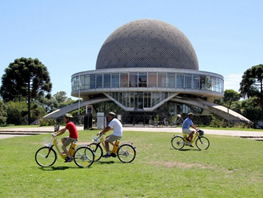 The Government of Buenos Aires has a program named ECOBICI, with "green" bike stations where people (local and tourists) can get their bikes freely, showing an ID or PASSPORT, for two hours. These bikes can be returned to the same or another station and so on. With this, visiting neighborhoods like Puerto Madero, Palermo, San Telmo, Belgrano, Downtown, is a pleasure by itself. Besides, there are bicycle paths available all over the city and its surroundings.

In addition there are special bike tours to help you to go around beautiful and touristic places as San Isidro and Tigre (North Zone), Luján (East Zone), San Antonio de Areco, Lobos and many others.


Here we give you some options of Bike Tours in Buenos Aires:


For those ones who come with their own bikes, there are also sites with information about paths, recommended streets and roads for bikers, bike stores and much more: