A GUIDE TO BUY REAL ESTATE IN BUENOS AIRES

Abasto: Abasto is not an official neighborhood in Buenos Aires. It is an area in Balvanera that also includes part of Almagro. The famous tango singer Carlos Gardel grew in Abasto, turning it into a neighborhood highly related to tango. Nowadays, Abasto is a cultural and touristic center, home to artists, craftsmen and musicians, crossed by the B Subway Line, the Sarmiento Railroad and numerous bus lines.

Almagro: Almagro is one of the most historical Buenos Aires neighborhoods, where tango, poetry, circus, factories, slaughterhouses, old streetcars, good educational institutions and the famous San Carlos Church considered to be the most attractive church in the city  coexisted. Almagro is crossed by several bus lines, the A and B Subway Lines and the Sarmiento Railroad.

Caballito: The name of the neighborhood derives from the horse-shaped weathervane Nicolas Vila put up at the door of his store located on Rivadavia and Emilio Mitre corner (caballito is the Spanish term for little horse). Caballito is a highly populated neighborhood in Buenos Aires, which has lately resulted in some problems associated with the provision of services. Located in the geographical center of Buenos Aires, Caballito is crossed by several bus lines, the A and E Subway Lines and the Sarmiento Railroad.

Downtown: Locals call Centro or Microcentro to the 60 blocks surrounded by the following avenues: Cordoba, de Mayo, 9 de Julio, Leandro N. Alem and de la Rabida. It includes part of San Nicolas and part of Monserrat. A lot of offices, stores, companies and banks are located in this area. Thus, at nights, during the week, Downtown is a deserted place. It is very easy to get to different places if you are Downtown, since a lot of bus lines and the A, B, C and D Subway Lines cross the city center.

Colegiales: Situated in Jesuit lands, the story of Colegiales is highly connected to Chacarita, since both neighborhoods were called Chacarita de los Colegiales because students used to spend their holidays there (colegiales is a Spanish term for student). Federico Lacroze, decorated with jacarandas, is the main street, where the commercial heart of the neighborhood is located. Colegiales is crossed by numerous bus lines and the Mitre Railroad.

Congreso: Congreso is not an official neighborhood in Buenos Aires. It is an area in Monserrat, located at Buenos Aires old quarter. Congreso boasts most cultural and historical heritage of the city, such as the Cabildo and the Congress buildings, Plaza de Mayo (May Square), Casa de Gobierno (Federal Government Office) y the so-called Manzana de las Luces (Block of the Lights). Since it is a downtown area, Congreso is crossed by several bus lines and the A and B Subway Lines.

Las Cañitas: Las Cañitas is not an official neighborhood in Buenos Aires, but an attractive area in Palermo. It has always been famous for being a quiet residential neighborhood, but everything changed during the 90s, when many restaurants, pubs, bars and discos began to open in the area. Furthermore, Las Cañitas experienced a construction boom of high and classy buildings. Since it is situated in Palermo, Las Cañitas is crossed by several bus lines. The D Subway Line and the Mitre Railroad cross near this area in Palermo.

Palermo: Palermo is the largest neighborhood in Buenos Aires. The Bosques de Palermo (Palermo Woods), the Planetario Galileo Galilei (Galileo Galilei Planetarium), the Jardín Japonés (Japanese Garden), the Jardín Botánico (Botanical Garden), the Rosedal (Rose Garden), the City Zoo and the Hippodrome are situated among its elegant houses and tree-lined streets. The coffee stores, design stores, theaters, restaurants and fairs have turned Palermo into a neighborhood full of joy, both during day and night. Several bus lines, the D Subway Line and the General San Martin Railroad cross this lovely Buenos Aires neighborhood, popularly subdivided into Palermo Hollywood (north of Av. Juan B. Justo) and Palermo Soho (south of Av. Juan B. Justo, near the so-called Serrano Square).

Puerto Madero: Puerto Madero is one of the 48 neighborhoods in Buenos Aires. Due to its location, extension and view over the river, Puerto Madero is one of the most exclusive neighborhoods in Buenos Aires. After becoming obsolete as a port, the neighborhood was turned into an expanding commercial center, where many offices and buildings were built, apart from universities, restaurants and 5 star hotels. The Puente de la Mujer (Womans Bridge) and the Fragata Presidente Sarmiento (President Sarmiento Frigate) are the main attractions of the neighborhood. Even though there are few means of transport in the area, many of them run in its surroundings: the A, B, D and E Subway Lines, the Sarmiento Railroad (Castelar  Puerto Madero Special Service) and many bus lines.

Recoleta: Recoleta is a stylish residential neighborhood in the center area of Buenos Aires. The Recoleta Cemetery, the Museo Nacional de Bellas Artes (National Museum of Fine Arts), the Biblioteca Nacional (National Library), the Centro Cultural Recoleta (Recoleta Arts Center) and the Palais de Glace are situated on its historical streets, apart from huge mansions, embassies and luxury hotels. The traditional bar La Biela and the literary coffee-house Clásica y Moderna (Classic and Modern) are two of the main attractions of the neighborhood. Since it is located near the city center, Recoleta is crossed by a lot of bus lines and the D Subway Line.

San Telmo: San Telmo is one of the oldest neighborhoods in Buenos Aires that has resisted becoming modern. On its cobble-paved streets, there are colonial big houses, old churches, museums and antique shops. During weekends, its streets offer different shows and, in its bars, people dance tango. The restaurants and bars situated in San Telmo have turned the neighborhood into one of the favorite areas to have a wonderful night in Buenos Aires. Several bus lines cross San Telmo.
[back to index]

* The following information concerns the requirements and legal process to buy and sell real estate in Buenos Aires. You may find some differences in the real estate buying or selling process used in other Argentine cities.
Temporary Apartments in Buenos Aires 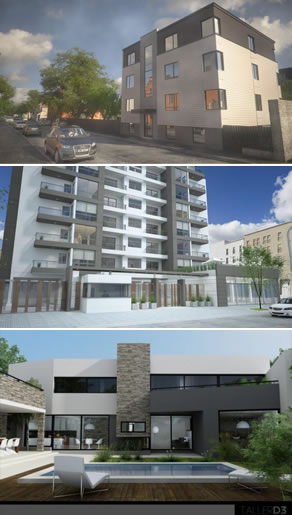