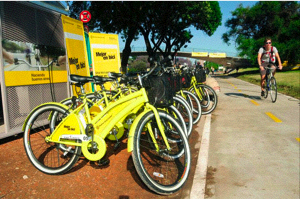 Apart from bike lanes, the Buenos Aires City Administration implemented the so called “Bicing”, the first bike public transportation system in Argentina. This system aims at providing a non-polluting healthier means of transportation, as the ones succesfully implemented in the main capital cities in the world, such as Paris and Barcelona. There are already 100 bikes on the streets and three docking stations located at UBA Law School (Figueroa Alcorta Av. and Pueyrredón Av.), Retiro (in front of Mitre Train Station) and Plaza de la Aduana (Paseo Colón Av. and Moreno St.). According to the original project, Buenos Aires neighbors will be have 5000 bikes and 200 docking stations at their disposal.

The purpose of this measure is promoting the bike as a means of transportation in Buenos Aires, reducing environmental and noise pollution, avoiding traffic jams, decreasing the number of cars on the streets –specially, on Downtown streets– and helping people achieve a more active and healthful lifestyle. Have fun visiting Buenos Aires by bike.