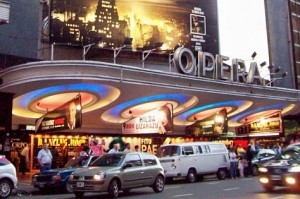 Buenos Aires cultural and nightlife take place on Corrientes Av., the largest entertainment center of the city located from Esmeralda St. to Callao Av., where it becomes a commercial avenue full of bookstores and record stores. Known around the globe as “the street that never sleeps”, theaters on Corrientes Av. turn their luminous marquees on every night to invite both locals and tourists to enjoy different types of shows. We have compiled a list of the main shows and plays at the main theathers on Corrientes Av. The show begins!

Acclaimed actor Diego Reinhold, famous stand up comedian and musical theater exponent in Argentina, plays the lead in Yo (Una historia de amor) (Me (A love story)), his first unipersonal show at Pablo Neruda Theater in Paseo La Plaza Complex. Yo (Una historia de amor) is an introspective play in which the main character analyzes his own being and even splits into two. He and his being eat, dance and sing together, fight and try to murder themselves in a show that will capture the audience.

Baraka is a play that analyzes with humor and emotion all the different aspects of friendship among men. Friends since childhood, Pedro (Darío Grandinetti), Juan (Juan Leyrado), Tomás (Jorge Marrale) and Martín (Hugo Arana), the main characters, have different life styles. However, Pedro’s crisis allows them to rediscover what they still have in common.

After the great success of Evita musical in 2009, Nacha Guevara shines again at Tita – Una vida en tiempo de tango (Tita – A life in tango time), a musical that chronicles the life and career of the unforgettable Tita Merello and portrays the golden years of tango and Argentine popular culture. Tango music and dance have a central role in the show, interpreted by a typical tango orchestra and cast.

Provocative actor Favio Posca is back on stage with Bad Time, Good Face, a vertiginous, relaxed and funny show in which the audience will learn the details of his mythical characters –Pitito, el Perro, Myriam, Ángel, etc. Humor, transgression and rebelliousness in one show.

Joaquín Furriel and Rodrigo de la Serna get on stage to personate Rodo and Dani in Lluvia Constante (Constant Rain). Rodo and Dani are two friends since childhood and young policemen who must face a series of events that will change their lives forever. The play aims at analyzing friendship, family, values, honor and loyalty.

The successful play La Guerra de los Roses (The War of the Roses) is performed in Buenos Aires by Adrián Suar and Carla Peterson. In this witty theatrical adaptation of the classical film, Octavio and Bárbara are prepared to “start a war” in order to keep the house they shared during the years of their marriage. A wonderful play that portrays the ordinary aspects of marriage life with humor and irony.

Adapted and directed by Manuel González Gil, Cuando Harry conoció a Sally (When Harry met Sally), the successful comedy from the 80’s, is performed in Buenos Aires. Starred by Araceli González and Raúl Taibo, the story starts when Harry incidentally meets Sally after finishing his studies at the university. Life takes them different ways to finally join them again in a sincere and deep friendship that, without them noticing it, will become love. 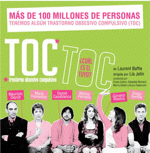 Toc-Toc is a funny comedy written by the famous French author Laurent Baffie in which its six characters suffer from obsessive-compulsive disorder (TOC is the Spanish abbreviation for this disorder). Starred by Mauricio Dayub, María Fiorentino, Daniel Casablanca, Melina Petriella, Eugenia Guerty and Diego Gentile, Toc-Toc characters meet at their psychiatrist’s waiting room. As the professional never appears on stage, the characters are forced to draw their own conclusions.

After the great success of Lutherapia in 2008, Les Luthiers are back on Gran Rex stage to present their new show ¡CHIST! antología. Humor and fun accompanied by outlandish compositions that will undoubtedly capture their faithful audience again. ¡CHIST! is an anthology that gather together numerous works from their wide repertoire.