Tourism industry continues growing rapidly in Buenos Aires, Argentina. In order to measure up to the main cities in the world, as from May 2, 2009, tourists may get to know Buenos Aires on Buenos Aires Bus. Total duration of the tour is 2 hours and 45 minutes, approximately. With a timetable, 12 fixed stops and the practical Hop On / Hop Off system, the bus starts its tour at 9 am and, with a half-an-hour frequency, it brings visitors to the main tourist spots in the city until its last service at 5.30 pm everyday. 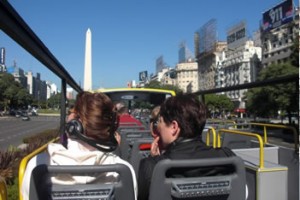 A trilingual tourist guide in each bus will receive the passengers, deliver descriptive material related to the service and the most important attractions they will find at each stop, and will also provide general information regarding the main tourist spots in Buenos Aires. Besides, during the tour, passengers may enjoy, from their seat on the bus, an audio guide to follow the tour. The aim of this tour is to make sure that people from all over the world can appreciate the beauty and diversity that abounds at every corner of Buenos Aires. Thus, Buenos Aires Bus offers a complete tour including a visit to the main neighborhoods and historical monuments, as well as theaters, coffee stores, restaurants and cultural centres.

History is present from the first stop at the famous Plaza de Mayo, where passegers may contemplate the Casa Rosada and the Cabildo. At the second stop, the Argentine Congress and its square stand out for its architecture. After hopping off the Buenos Aires Bus at the second stop, do not miss the opportunity of taking a cup of coffe at the traditional Café de los Angelitos, famous for being in the 1920’s the meeting place of both bohemians and thugs. Enjoy visiting the traditional Monserrat neighborhood at the third stop and walk around the Manzana de las Luces. At the fourth stop, know all the secrets hidden in San Telmo, a neighborhood famous for its Plaza Dorrego and the Museo de Arte Moderno. Immerse yourself in the colorful streets of La Boca, where you may walk along Caminito, be deligthed by Benito Quinquela Martín’s art and marvel at the immensity of Club Atlético Boca Juniors Stadium. At the sixth stop, you will be able to visit the Reserva Ecológica and admire the exquisite fountain Las Nereidas, sculptured by the artist Lola Mora. Once in Puerto Madero, at the seventh stop, you can cross the famous bridge Puente de la Mujer and visit the Museo Colección Amalia Lacroze de Fortabat. Profit the eightth stop to walk around the prestigious Plaza San Martín, which is surrounded by excellent sculptures and beautiful buildings, such as the Ministerio de Relaciones Exteriores y Culto – Cancillería (ex Palacio San Martín) and the Museo de la Inmigración.

Take your time to walk and tour after hopping off at the nineth stop, since Palermo has a bunch of things to offer: its woods and its lake, the Zoo, the Rosedal, the Planetarium Galileo Galilei, the Jardín Japonés, the Museo de Arte Latinoamericano de Buenos Aires (MALBA), etc. At the tenth stop, passengers may appreciate the Sociedad Rural Argentina and the Jardín Botánico Carlos Thays. Make the most of Recoleta, at the eleventh stop, and visit the Cemetery –famous for its nice sculptures and mausoleums, – the Centro Cultural Recoleta and the Museo de Bellas Artes, apart from contemplating the Floralis Genérica and taking a cup of coffee at the prestigious Bar La Biela. Finally, at the twelveth stop, you may appreciate the Teatro Colón, Corrientes Avenue full of lights and theaters, and crown the tour with a view of the emblematic symbol of Buenos Aires: the Obelisco. Undoubtedly, this complete tour offered by Buenos Aires Bus will make every passenger to fall in love with the cosmopolitan Buenos Aires.

There are two types of tickets: One-Day Tickets and Two-Day Tickets, which can be purchased at the following places: