A wonderful tour around the old port area that includes 16 refurbished warehouses that house modern offices, restaurants, bars, pubs and other businesses. Puerto Madero is open day and night for formal and informal outings, business conferences or meetings with friends.

In 1872, the government decided to build a complete modern port and accepted the project presented by Eduardo Madero. The project was ended in 1898, but the warehouses were finished between 1900 and 1905. However, due to the narrow access canals, port installations were transferred to Puerto Nuevo.

In 1989, the company Corporación Antiguo Puerto Madero decided to urbanize the area. Even though the project is far from complete, there are plans to build more buildings, a hydraulic bridge, a five-star hotel and an art museum over the following years.

The heaviest traffic in Puerto Madero extends from Docks 4 to 2, where most restaurants, pubs and offices, and the Universidad Católica Argentina (UCA, Argentine Catholic University) are located.

REPÚBLICA BUILDING: Designed by Mario Álvarez and César Pelli, thanks to its convex curve, the República Building overlooks the North Port, the Nature Reserve and De la Plata River. It has a heliport and a novel energy-saving curtain wall (Viamonte, Bouchard, Córdoba and Madero).

TELECOM BUILDING: Designed by Kohn, Pedersen and Fox, from New York, and their Argentine associates Hampton, Rivoira y Asoc., Telecom Building is 70-meter high and occupies an area of 32,000 m ².

POST OFFICE: Designed by French architect Norbert Maillart, the Post Office was inaugurated in 1928. Its façade is decorated with four large double columns topped by four domes. It has been recently restored with an impressive elegant style. A small office at the entrance sells collectible stamps (Leandro N. Alem and Sarmiento).

LUNA PARK: Built in 1931, the building was originally one of the most important boxing stadiums in the world. It is now an indoor arena for concerts, plays, ballets, circus and ice skating shows, and international basketball and volleyball games (Lavalle, Madero, Corrientes and Bouchard).

FRIGATE PRESIDENTE SARMIENTO MUSEUM SHIP: This English ship, anchored at Dock 3 and built in 1897, was also used to train naval cadets. All the machinery is original, as the furniture and utensils used by the cadets. Models of the ship, trophies and donations received during training cruises are also exhibited.

HOTEL DE LOS INMIGRANTES (HOTEL OF IMMIGRANTS): The building was inaugurated in 1911 to accommodate newly-arrived immigrants until they get a job. It now houses several government agencies (3355 Antártida Argentina). 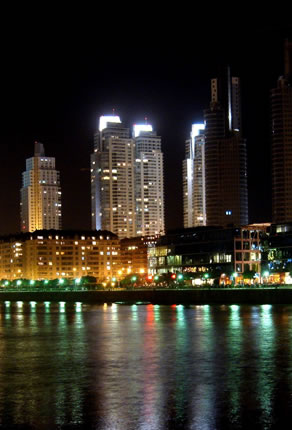