Belgrano is one of the most residential and refined neighborhoods in Buenos Aires. It has a great amount of old and important lordly houses, most of them typical of the end of last century. On the other hand, modern, sophisticated, comfortable and, in some cases, spectacular buildings have been built in this neighborhood.

Belgrano is full of culture, tradition and history. On its streets, monuments, museums, libraries and fantastic parks can be appreciated. It is enough to know that it was designed by Carlos Thays, a French architect hired by Domingo Faustino Sarmiento, responsible for the design of many of the most beautiful parks in the city.

Av. Cabildo is full of all types of stores, restaurants, bars, theaters, museums and movie theaters. Nightlife goes on till dawn.

Nowadays, many property owners decided to offer their apartments for temporary rent. Thus, Belgrano together with Palermo and Recoleta  became one of the most cosmopolitan neighborhoods in Buenos Aires.

Do not miss the opportunity of taking a tour around this multifaceted Porteño neighborhood that combines modernity, antiquity, culture, history and joy.

DOMINGO F. SARMIENTO MUSEUM OF HISTORY: Its rooms reflect the former president´s multifaceted personality: a teacher, a writer and a soldier. There are a restaurant and a tea room in the garden. Open all year round (2180 Juramento).

BELGRANO RIVER BANKS: They are part of the banks of the De la Plata River. They are divided into three squares, where you can even find a replica of the Statue of Liberty or a bust of Argentina´s national hero José de San Martín. During weekends, you can listen to bands performing outdoors.

IMMACULATE CONCEPTION CHURCH: Popularly known as La Redonda (The Round) for its cylindrical shape. It features a porch and a large dome. The images of St. Rita, St. Genaro and the Immaculate Conception of Mary can be seen inside the Church. In front of the building, there is a craft market where you can buy different products and craftworks (Vuelta de Obligado and Juramento).

ALFONSINA STORNIS HOUSE: Home to the sole representative of postmodern female poets on the west bank of De la Plata River. She also participated in the womens movement, aware of the social problem that women liberation represented, since she had to fight to live and maintain the status that an intellectual person, like her, required (3015 Cuba).

ENRIQUE LARRETA MUSEUM OF SPANISH ART: The Museum exhibits pieces from the 18th to the 20th centuries. During summer, different plays are performed in the Andalusian garden (2231 Juramento). 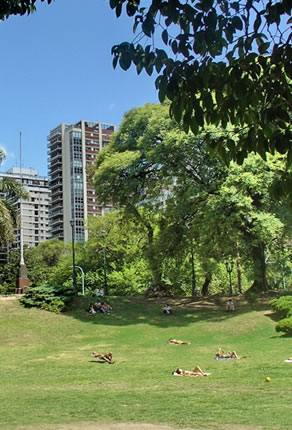