Porteños call Centro to the area that surrounds the Obelisk of Buenos Aires, where the main business and financial centers of the country, apart from several stores, government buildings, parks and squares are located. 9 de Julio and Rivadavia the widest and longest avenues, respectively  cross this area of the city.

Plaza de Mayo (May Square) is the historic core of Buenos Aires, where the greatest historical events took place. During the colonial period, it had a double function: it was the public market and the civic center, since it is surrounded by the most important public buildings in the city, such as the Cabildo and the Buenos Aires Metropolitan Cathedral. Avenida de Mayo has maintained its style over the years and still is the perfect place for intellectuals, artists, politicians and journalists to meet and express their opinions.

Florida, the main pedestrian street in Buenos Aires, is the ideal place to go shopping: It consists of ten blocks full of shops, commercial arcades, bookstores, bars and fast-food outlets. It is very crowded during the day, since many Porteño workers walk this street.

Every Downtown corner has its own history. So, you cannot miss the opportunity of taking a tour around these historic streets in Buenos Aires.

PLAZA SAN MARTÍN (SAN MARTÍN SQUARE): Designed by Carlos Thays, who planted a wide variety of tree species, Plaza San Martín has great historic importance because it was the battlefield on which Buenos Aires residents defended themselves from the English invasion in 1807.

CORRIENTES AVENUE: Corrientes is the theatre-life avenue of Buenos Aires. It is mentioned in many tango lyrics and poems. Besides, there are many bookstores, pizzerias and coffee stores.

OBELISK: The Buenos Aires Obelisk is 67.5 meters high and has long been the icon of the city. It was built in 1936 and it commemorates the first time the Argentine flag was raised in 1812 (9 de Julio and Corrientes).

COLÓN THEATER: It was built in 1907 by architect Julio Dormal. The French-style building was designed to seat 2490 spectators. The theater has a Parisian dome and its own Museum of Antique Musical Instruments (Cerrito, Viamonte, Libertad and Tucumán).

CAFÉ TORTONI: One of the oldest, most traditional and best preserved coffee stores in Argentina. Founded in 1858, among its famous clients, we found tango singer Carlos Gardel and artist Benito Quinquela Martín. Today it is a traditional meeting place where jazz and tango shows are presented at night (826 Avenida de Mayo).

CASA ROSADA: Seat of the national government since the Primera Junta (First Assembly) in 1810. It was Domingo Sarmiento who decided to paint the government house in pink to symbolize the reunification of the country after the civil war between the Federals (whose color was red) and the Unitarians (whose color was white). The building has a singular look and a balcony from which Juan and Eva Perón used to harangue masses (50 Balcarce).

CABILDO: The famous May Revolution (the struggle for independence that occurred in 1810) took place in the Cabildo, which stopped functioning as a municipal council after the Cabildo Suppression Act was enacted in 1821. Nowadays, it is the National Historical Museum of the Cabildo of Buenos Aires and the May Revolution. 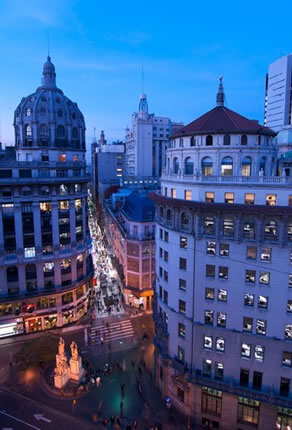