Nowadays, Palermo is one of the most crowded areas in Buenos Aires during day and night. Popularly divided into Palermo Soho and Palermo Hollywood due to the settlement of TV networks and independent production companies in the area,  it is a very quaint neighborhood, the largest in the city, in which hundreds of theme bars, restaurants, nightclubs, art galleries, and antique, decoration and design stores have taken over the façades.

Restaurants stand out because of their different styles, some with extravagant and futurist decorations, others more traditional, where all cuisine styles coexist: from Mediterranean, Mexican or Vietnamese food, sushi bar, among others.

Many restaurants are turned into nightclubs and stay open till dawn. In others, Happy Hour is the queen of the night: two drinks for the price of one. Besides, there are bars that offer alternative plays or live music, such as jazz, funk or soul.

One of the charms of this traditional neighborhood is the attempt to preserve its architecture. The houses maintain their original façades and typical long structures, with large rooms, high ceilings and a patio.

Julio Cortázar Square, aka Plaza Serrano, located at Borges and Honduras, is a cultural activities center. Around this small square, you can take a walking tour through the beautiful paths Cabrer, Soria, Santa Rosa and Russel, on which low colorful houses, bushy trees, and gift and crafts stores ca be found.

Nowadays, many property owners decided to offer their apartments for temporary rent in palermo. Thus, Palermo together with Belgrano and Recoleta  became one of the most cosmopolitan neighborhoods in Buenos Aires.

BOSQUES DE PALERMO (PALERMO WOODS): The greenway of Buenos Aires. The Palermo Woods consists of 25 green hectares, where you will find the Rosedal (Rose Garden) and the Jardín de los Poetas (Poet´s Garden), with sculptures that pay homage to Alfonsina Storni, Federico García Lorca and William Shakespeare, among others. Palermo Woods is the perfect place to relax (Av. Casares and Av. Sarmiento).

GALILEO GALILEI PLANETARIUM: Its design was inspired by the planet Saturn and its name pays homage to the scientist that first looked at the sky through a telescope. It offers shows that explain astronomy in simple terms in its 360º auditorium where documentaries on space, planets, constellations and other mysteries are screened (Av. Sarmiento and Belisario Roldán).

CITY ZOO: 18 hectares full of different animal species. Besides, the City Zoo offers educational activities, such as a farm dedicated to the protection of species in danger of extinction (Av. Las Heras and Av. Sarmiento).

JARDÍN JAPONÉS (JAPANESE GARDEN): Donated to the city in 1979 by the Japanese Association in Argentina, it was designed in the classical Japanese landscaping style. It has an artificial lake and five islets that can be reached by crossing beautiful wooden bridges. There is also a great variety of plant species (Av. Casares and Berro). 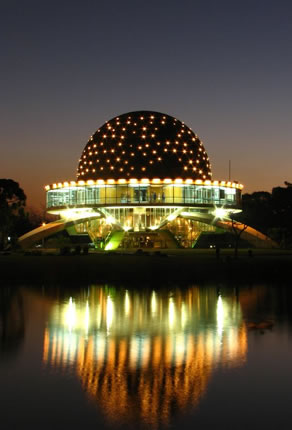