Recoleta is one of the most residential, elegant and expensive areas in Buenos Aires. It stands out for its green spaces, exclusive avenues, embassies, bars and first rate restaurants.

This elegant district has a European reminiscence: its architecture evokes images of France, with beautiful boulevards full of trees that guide you to the best restaurants and coffee stores, boutiques and galleries.

Recoleta has a very active nightlife. Most restaurants, pubs and nightclubs are located on the streets that surround the famous Recoleta Cemetery (Junín, Azcuénaga and Vicente López). During weekends, you can enjoy the extense Crafts Fair and free shows that take over the squares.

Nowadays, many property owners decided to offer their apartments for temporary rent in Recoleta. Thus, Recoleta together with Belgrano and Palermo  became one of the most cosmopolitan neighborhoods in Buenos Aires.

Do not miss the opportunity of taking a tour around this distinguished Porteño neighborhood that combines modernity, antiquity, culture, history and joy.

LA BIELA: This traditional coffee store has been famous since 1942 and it has been very popular among racing-drivers and fans. It was reconstructed after a fire in 1975 (Quintana and Roberto M. Ortiz).

RECOLETA CEMETERY: Recoleta Cemetery is among the 3 most important cemeteries in the world. It was created in 1822 and remodelled several times. The cost of these mausoleums reflects the opulence of the dominant upper class between 1880 and 1930. They are symbols of status and power, since most are made with materials imported from France and Italy. Most of the tombs were declared national historical monuments because many Argentine historical characters, such as ex presidents and worldwide recognized figures, like Evita Perón, lie there (1760 Junín).

IGLESIA DEL PILAR (PILAR CHURCH): It is the second-oldest church in Buenos Aires and it was inaugurated in 1732. Designed by Jesuit architect Andrés Blanqui, it is dedicated to Our Lady of Pilar. The interior has a Jesuit style and small baroque altars (1920 Junín).

CENTRO CULTURAL RECOLETA (RECOLETA ARTS CENTER): It started as a chapel and it was later replaced by Iglesia del Pilar. It also functioned as a hospital during the British Invasion in 1806; as an art academy in 1815; and as a charitable society and asylum till it was remodeled by architect Juan Buschiazzo in 1858. It was turned into an arts center in 1979 by Jacques Bedel, Luis Benedit and Clorindo Testa. Now it has an auditorium, an exhibition area, a bookstore called El Eternauta, and a Music, Sound and Image Department. The Participative Science Museum is special for kids: a place where it is Forbidden Not to Touch (1940 Junín).

PALAIS DE GLACE: It is an old ice-skating rink remodeled by architect Bustillo, who turned it into an exhibition hall. The building is crowned by a large glass dome that provides natural illumination (1725 Posadas). 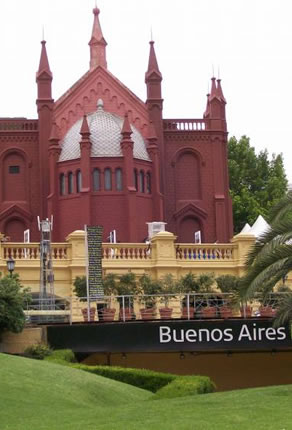